On the road for our new pilot... 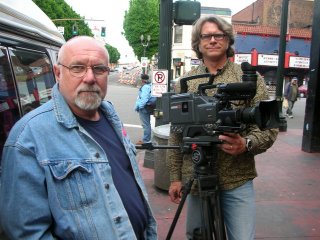 We're back out on the road again...feels like it has been ages, and it has been almost a year since we shot the last DECLASSIFIED interview.

Here's Kosh and Mike Balog on the streets of Portland for our latest excursion. We're still messing about with the title...all I can say at this point is that it's about the moon landings. We've also lined up an amazing on-camera host...more on him soon. In this shot, Kosh and Mike are getting ready to shoot exteriors for a place called Dante's.

I also had a chance to see my old friend Dr. Mead Hunter, who is now Literary Manager up at Portland Center Stage ... he showed me the new space they're building at the amazing old Portland Armory. I can't wait to go back.

All in all...what a great town! I didn't have a bad meal outside of the airport, and the hotel that our genius Line Producer Jennifer Knott lined up for us... Fifth Avenue Suites ... absolutely spectacular.

May Day in Mid-Wilshire 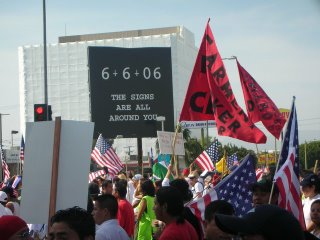 I had a ringside seat at the enormous rally today...it was quite an amazing site. I was working in Koreatown that day and I know I only saw a fraction of the march. By the time I left I doubt more than a quarter of the half million had passed my corner.

From Wilshire & Vermont...I call this photo "Hollywood Gets it Wrong...Again," since the date should have been 5/1/06. Still, for those who paid attenion, The Signs Were All Around... 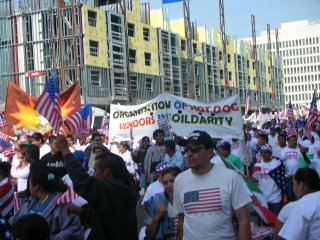 Of all the signs I saw, I think this was the most...er...endearing? Touching? In Pico Union and Koreatown...in fact, in a lot of downtown and east L.A. you'll see these vendors selling hot dogs wrapped in a strip of bacon and fried on little pushcart griddles: it's the L.A. rejoinder to the great street junk food of the east.

Well, they had a banner...the Organization of Hot Dog Vendors in Solidarity. Right on!

The office building I was in was pretty much empty by 4:00PM...the guard was a little tired of having to get up to let me in and out of the lobby...by 5, we were all gone, but the march was still going.