I'm working on the next edition of Ken Roht's 99 Cents Only show, and (like always) I've gotta do something new. That was always going to happen on a show involving Ken, but now that he's decided it's got to be totally sustainable/recyclable...well, that's really interesting, no? The 99 Cents Only show is the height of plastic and plasticity ...

Video is, of course, an analogue for plastic: it's bright and hard-edged. So how do you create theatrical video that is at once video, but also somehow speaks to the feel the show is now reaching for?

Here's one avenue I went down...I shot a stroll through CicLAvia last week with my wife Risa, our strolling buddy Jeann Young, and a whole mess of Angelenos. It was a spectacularly pastoral event on streets usually ruled by autos, and I wanted to do something with the video to capture that sunny mood.

Here's that video...using CartoonR and Sony Platinum to give it just the right heightened reality. Seems like it might work for some aspects of Ken's new show, SAME-O.

John Joseph Flynn ... a short for the Memorial Convocation

This one pretty much speaks for itself, I think...

No No Boy Projections 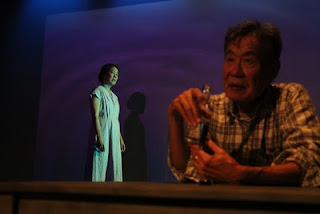 I was cleaning up some old projects and came across these great photos from NO NO BOY...including the way the prouduction team used my projections.

Working on video for NO NO BOY...

This has got to be my busiest year since creating Story Tactics: half a dozen projects in theater/opera/film, and half a dozen new multimedia commissions for various other clients.

First up is NO NO BOY, a project I have been working on and thinking about for over a year. Ken Narasaki has done a wonderful adapation of John Okada's groundbreaking novel about a Japanese American draft resister from WWII. Everyone knows about the internment of Japanese Americans during the war, many people know about the famed 442nd "Go For Broke" batallion that was covered in honors during WWII, but not so many people know the story of the people who resisted the government's loyalty oath because their freedoms were taken away. The scars within the Nisei-Sansei-Yonsei community are still there: I'm very intrigued to hear how people inside the community react.

So I am creating a lot of video for the piece, mostly video to set scenes and moods, but I'll also be doing a couple of pieces like this one. I'll be updating it when the (inevitable) good reviews come in...it is a first-rate cast and crew, and Ken's script is fantastic.

No No Boy, The Play from John Flynn on Vimeo.

I stumbled on this special edition of our doc about Castro in the Daedaelus catalogue the other day. I'd previously thought that History was only offering them as part of their special DVD sales site (where they sell DVDs on demand).

This one looks like someone spent a few minutes designing a cover for it (although I'm sure Kosh would have done FAR better in half the time), so I'm plunking down some bucks for a copy or two. It'll be a collectible in at least one sense: History had me re-write the ending about six months after it first aired. Castro was undergoing surgery and the thought was that he might not make it: they wanted to have CASTRO DECLASSIFIED ready to roll if he died, and so they had me re-write the final segment to change a few verb tenses.

So when Fidel does finally shuffle off this mortal coil, turn on History and you'll hear the revised version...until then, you can get the FIDEL LIVES version right here!
Posted by John J. Flynn, Ph.D. at 9:55 PM No comments:

Last weekend I had a chance to do a sort of sketch for a doc I'd love to do...it's about the "Fishbowl" at the Page Museum where my good friend Catheryn Clarke works as a volunteer. The Page is the museum next to the famed La Brea Tar Pits, and the Fishbowl is where visitors can go to watch the Lab Rats clean up the mastodons, sabre-tooth cats and so on.

I think it's interesting that I just rolled this as one take...there's SO much to look at there. As Catheryn says, "It ought to be considered the Eighth Wonder of the World...there's nothing like it anywhere...."

In The Fishbowl at the Page Museum, La Brea Tar Pits from John Flynn on Vimeo.

Places to Look for A Mother

Another audio piece...a section of Nicole Stansbury's award-winning novel PLACE TO LOOK FOR A MOTHER. 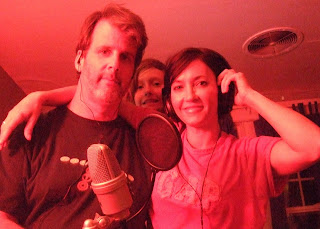 I don't think Nickie would mind if I mentioned that there's a lot more reality to this piece than you'd expect...and it is a pretty harrowing story. It reminds me of one of Chris Offutt's definitions..."Short Story: An essay written to conceal the truth and protect the author's family."

I love this book because it's about a place that I know so well, a West that I grew up in. It's a true West (Sam Shepard pun intended): full of dreamy and desperate and tough people. And the girl at the center of the story...well, she's true too.

The music is Ry Cooder, from a couple of different scores...and the recording was done a while ago (almost a year and a half ago).

Listen to PLACES TO LOOK FOR A MOTHER (Streaming MP3)

(picture by Jack Sperry...that's Otis behind Nickie & I)